Polycystic ovarian syndrome (PCOS) is the most common hormonal abnormality in women of reproductive age, affecting 5-10% of women in this age, and is certainly a leading cause of infertility. PCOS is generally characterized by an excess production of androgens, anovulation and amenorrhea. In 90% of women with PCOS, an ultrasound of the ovaries will reveal cysts that can be seen on the surface of the ovary. Several genes involved in the biosynthesis of androgen and action of insulin and gonadotrophin have been examined as candidate genes for PCOS. However, only the linkage with follistatin gene remained significant after correction for multiple testing. In this study, 38 clinically diagnosed PCOS Iraqi female and 36 healthy Iraqi female were enrolled for polymorphisms/mutations analysis in the follistatin gene exons as predisposing molecular marker for PCOS. Genomic DNA was extracted from peripheral blood of each subject using DNA extraction and purification kit. Specific primers for amplification of the normal sequence of follistatin gene exons and internal control were used in polymerase chain reaction (PCR). Amplified products were electrophoresed on agarose gel. The results showed that there was no mobility shifting in any of the PCR products, and that refers to the absence of polymorphisms/mutations in the exons. In conclusion, polymorphisms /mutations in the coding regions of the follistatin gene may not be a common cause of PCOS in these patients.

The observation of familial aggregation of PCOS showed that it is consistent with a genetic basis for this disorder. The mode of inheritance is uncertain at this point, and the role of shared environmental factors such as diet and lifestyle in the presentation of the disease is unknown (Xu et al., 2011).

Several pathways have been implicated in the etiology of PCOS. Several genes from these pathways have been tested as candidate genes for PCOS. Although mutation analysis, linkage studies and case-control association studies have been carried out with these candidate genes, evidence that any of them play a role in PCOS has not been replicated widely and is still inconclusive (Liao et al., 2000; Dasgupta et al., 2012).

Strong evidence for a link between the follistatin gene and PCOS has been found in a well-designed large-scale study. There is a single follistatin gene that can generate two mature mRNA transcripts by alternative splicing (Suganthi  et al., 2010). Follistatin is a single-chain glycosylated polypeptide that can bind to activin and suppress the role of activin to stimulate the secretion of follicle-stimulating hormone (FSH). FSH plays an important role in folliculogenesis and decrease in FSH level may arrest follicular development (Ehrmann, 2005).

In this study, follistatin gene exons were screened for single-nucleotide polymorphism (SNP) or mutation as genetic predisposing marker in Iraqi PCOS patients.

A total of 74 Iraqi women recruited in the Institute of Embryo Research and Treatment, Al –Nahrain University, Iraq, from February 2011 to June 2012 were enrolled in this studied. Thirty eight were patients with PCOS. The diagnosis of PCOS was assigned using the 2003 Rotterdam Criteria of PCOS (ESHRE/ASRM, 2004). They had irregular menses (≤ 21 or ≥ 34 days), hirsutism, acne and/or obesity (BMI more than 27 Kg/m²), together with multiple ovarian cysts detected by ultrasound. Thirty six were non-PCOS women (healthy control) with normal menstrual cycles, without hirsutism, acne and no ovarian cysts detected by ultrasound.

Both PCOS and healthy control had not any of exclusion criteria such as androgen-producing tumors, hyperprolactinemia, active thyroid disease, Cushing's syndrome, history of hypertension, diabetes mellitus, and hypercholesterolemia. None of the PCOS subjects was taking any medication known to affect carbohydrate metabolism or endocrine parameters for at least 3 months before entering the study.

Genomic DNA was extracted from peripheral blood by using DNA extraction and purification kit ( Promega, USA) according to the manufacturer procedure .

Specific primers for PCR amplification of follistatin gene exons and internal control were used according to Liao et al. (2000).The cycling profile consisted of denaturation at 92°C for 1 min, annealing at 52°C for 1 min and extension at 72°C for 1 min, with Initial denaturation at 94 °C for 4 min and final extension at 72°C for 10 min. Then, 10μl of the amplified product was examined  by electrophoresis on a gel containing 2.5% agarose.

Data were analyzed using SPSS version 16 and Microsoft Office Excel 2007. Numeric data were expressed as median, mean, standard deviation and range. Nominal data were expressed as number and percent. Chi-Square test was used to study association between nominal data. Fischer Exact test was used when chi-square test is not valid. P-value was considered significant when it is less than 0.05.

Characteristics of the PCOS patients and controls

Using the primers with normal sequence to amplified exons of gene, no deletion was shown in any of the exons, since there was no shifting in the  molecular size of PCR products. That reveals the absence of SNPs or mutations in the exons.

Table 1. The median and mean values of age and BMI of PCOS patients and healthy control 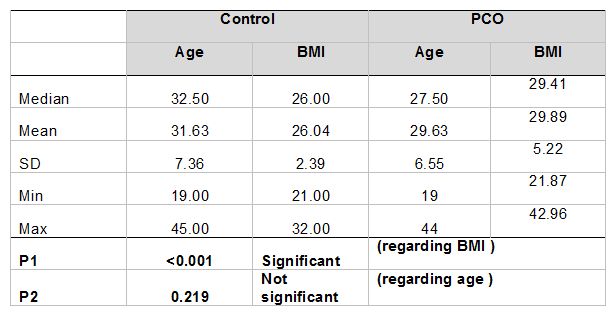 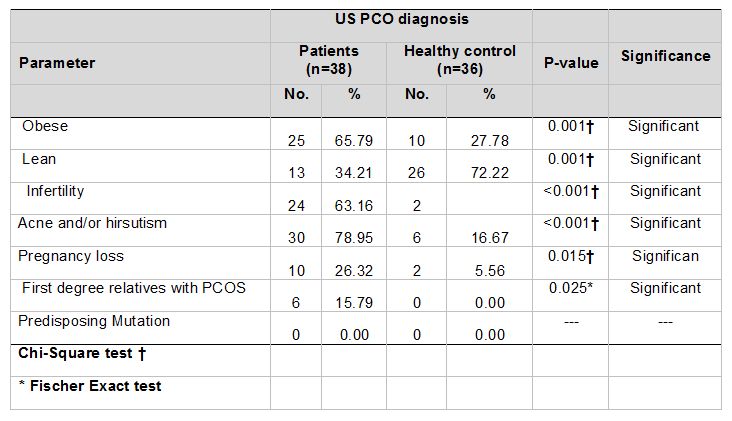 It has been identified that the PCOS may be the presentation of a complex genetic trait disorder (Rajkowha et al., 2000; Balen, 2001).

In this study, 65.79% of PCOS patient were obese, and that is consistent with Azziz et al. (2004), who referred that obesity is present in 30-70% of women with PCOS, depending on PCOS diagnostic criteria used and race/ethnicity of the population.

From those obese patients, 23/25 (92%) were infertile. That is consistent with (Wang et al., 2002) who referred that in infertile women with PCOS usually overweight or obesity is more prevalent. The relative importance of PCOS status and overweight/obesity in this group of women is yet to be fully understood, although increasing evidence suggests that BMI contributes significantly towards the severity of many problems, such as the risk of miscarriage. Conversely, one study showed that 30% of morbidly obese women met criteria for PCOS compared to 5% of the lean population (Laitinen et al., 2003).

We did not found any mutation in studied exons of follistatin gene. This is consistent with the study of Liao et al. (2000) and the study of Dasgupta et al. (2012), because they did not find a mutation in the coding region of the Chinese population and South Indian women, respectively. Also, researchers were unable to detect any mutation of the activating or inhibiting type in the entire coding region of follistatin gene in 64 patients with PCOS (Panneerselvam et al., 2010).

A study of Jones et al. (2007) in 173 Caucasian women suggests that polymorphism in the follistatin gene is associated with key androgenic phenotypes of PCOS. Although their study was larger than many molecular genetics studies of PCOS published to date, the power of the study remains relatively modest.

Therefore, mutations in the coding regions of the follistatin gene may not be a common cause of PCOS in the population studied. However, it is possible that mutations may reside in the regulatory region of the gene

Recently, it has become evident that a group of non–protein-coding genes that transcribe a family of small RNAs also acts as key regulator of gene expression stability. Among this family of small, non–protein-coding RNAs are miRNAs, which target gene expression stability through transcriptional repression or degradation. It appears that the expression of miRNAs in the ovarian supporting cells may have a direct regulatory effect on the expression of specific genes involved in folliculogenesis, as well as granulosa/theca cell functions associated with PCOS and possibly other ovarian disorders (Toloubeydokhti et al., 2008).

Open reviews for this paper

Click below to see contributions from reviewers of this page.

Proper Use of Molecular Analysis Techniques for SNPs and Detection of Small Deletions Not rated yet
Overall, it is an interesting article. However, presence of SNP cannot be ruled out using PCR and agarose gel electrophoresis. Allele-specific PCR and …