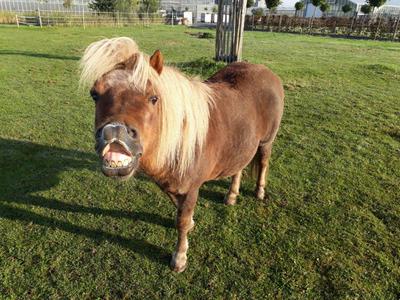 We live in Belgium. Every year in the spring, when grass is rich, my 17 years old pony suffers from laminitis. I use to call the vet who prescribes some medicines and we have to shorten the time spent in the meadow or even prohibit it.

This year, the first symptoms of laminitis appeared in April. Norby was having difficulties to walk and was suffering. It was on a Sunday. I came across this article from Susan Rogerson and I wanted to give it a try. I had a bottle of cream ready in the fridge. It was liquid cream with 35% fat which is easy to give in the mouth with a syringe. My pony even seems to love it.

The result with liquid cream was spectacular!

I started with 30 to 40 of cream in the morning & in the evening. The day after he was obviously already feeling and walking much better. A couple of days later he was even trotting for a while. Note that he was allowed to go t the meadow during few hours a day.

I have reduced the quantity of cream to 40cl in the evening after 2 weeks when laminitis symptoms were gone...

The pony stays in the paddock at night but is allowed to grass about 4 to 6 hours a day in the meadow.

We are now in June and I have stopped the cream. The risk for laminitis is lower because the grass in not so rich any more.

I will certainly use this great method again next year in the spring and recommend it to anyone facing similar problems.

I prefer cream to medicines and the effects are much faster. I haven’t noticed any drawback using cream.

Thank you Susan for your article!

Return to open review for this paper.