The purpose of this study is to characterise progesterone concentration in Bali cows before, during and after pregnancy. This study enables pregnant status to be detected shortly following conception in Bali cow.  Five Bali cows and one Bali bull were used in this study, between June 2010 and September 2011. The concentration of progesterone in the blood serum was analysed using Enzyme-Linked Fluorescent Immunoassay principle in Enzyme Linked Immunosorbent Assay method. Cow bodyweight increased during pregnancy aligned with foetus development in uterus. The progesterone concentration in non-pregnant cow was 1.32 ± 0.93 ng/ml over 11 months of observation. For the pregnant cows the progesterone concentration was 0.76 ± 0.64 ng/ml before pregnant and increased pronouncedly ranging between 7.43 ± 5.27 and 16.7 ± 2.29 ng/ml from the first up to the 7th month of pregnancy, then slightly declined toward parturition, between 11.55 ± 0.71 and 8.46 ± 5.33 ng/ml, and plunged down markedly to level of 0.89 ± 0.24 ng/ml following parturition. Progesterone concentration were markedly different in pregnant versus non-pregnant Bali cows. This allows pregnant status of Bali cow to be detected shortly following conception.

Bali cattle is known for their adaptability to harsh environmental condition, with low quality feed, but still have a high fertility rate that give high production performance (Darmaja, 1980; Wiryosuhanto, 1996; Enwistle, 2001). The estrus cycle period in cows generally ranges from 18 to 24 days (Parish, 2010) and Bali cattle recorded 20 days for heifer and 21 days for cow (Pane, 1991; Wirdahayati, 1994). Estrus cycle consists of four phases, namely proestrus, estrus, metestrus and diestrus (Anonymous, 2011a).

Progesterone is a hormone produced by the corpus luteum (Rekawiecki et al., 2008). Several studies have reported that progesterone concentration is correlated to corpus luteum size (Putro et al., 2008). However, it has been reported that no significant differences exist in progesterone concentration between breed (Jimenez et al., 1985; Diaz et al., 1986).  This hormone is essential for preparation of the reproductive tract as the place to implant the embryo and the maintenance of the pregnancy (Hafez and Hafez, 2000; Romano, 2011; Anonymous, 2011b). When progesterone level in cow’s blood serum is less than 1 ng/ml, this indicates that the animal is in the luteal phase of the estrus cycle. In contrary, if its level is higher than 1 ng/ml, it shows that the animal is in the follicular phase (Ricoy et al., 2000).

The objective of this study was to characterise progesterone concentration in Bali cows before, during and after pregnancy and to enable early pregnancy detection subsequent to conception in Bali cow.

Five cows and one bull were used in this study. The females were given specific number for the ease of identification. Four females were mated with male and the other one was untreated (unmated) and referred as control. The selected bull fed with similar basal diets of mix forages such as elephant grass, setaria, mullato and rice straw, supplemented with rice bran 0.5% body weight. All animal received the same amount of feed. Salt and water were provided ad libitum throughout the day. All cattle were treated with albendazole and ivermectin, against internal and external parasites, prior to the commencement of the experiment.  Following estrus, cow females were naturally mated with the bull.  Blood samples were taken periodically every month prior and during pregnancy and one month subsequent to parturition. Body weight was monitored monthly.

Blood (6ml) was obtained from the jugulars vein, using a 10ml syringe and transferred into a 10ml glass tube. Serum was separated by centrifugation at 3500 rpm for 10 minutes 3 times. The blood serum was then put into a numbered micro tube. Progesterone concentration in the serum was determined using Enzyme-Linked Fluorescent Immunoassay (ELFA) principal in Enzyme Linked Immunosorbent Assay (ELISA) method which has sensitivity close 100 times better than original ELISA (Yolken and Stopa, 1979).

All data were tabulated and analysed descriptively using excel 2007 (Windows 7).


Figure 1: Progesterone levels in Bali cattle before, during and after pregnancy.

The study showed that the average levels of progesterone in Bali cows during the period of 1st to 7th month of pregnancy ranged from 7.43 ± 5.27 to 16.7 ± 2.29 ng/ml. This high level of progesterone was produced by the corpus luteum to maintain the pregnancy (Mann and Lammning, 1999; Inskeep, 2004; Romano, 2011). If the pregnancy occurred, the corpus luteum sustains its progesterone level high until reaches of 13.9 ng/ml (Anonymous, 2012). Yanhong et al. (2004) reported that luteal cells increased significantly with development of corpus luteum, during the 5-8 week of pregnancy.  However, the progesterone level obtained in this current study was higher than those reported by Belli et al. (2011), who found 5.46 ng/ml in 3 weeks of gestation and reaching a peak level of 10 ng/ml in 10 weeks of gestation. Differences of these results might be caused by difference of methods; where Belli and Jelantik (2011) used Radio Immuno Assay methods as Belli and Jelantik (2011), they also found that increasing feed quality has no significant effect on progesterone level in Bali cattle.

At the 1st month after giving birth, the average level of progesterone was close to the level before pregnancy, with the average of 0.89 ± 0.24 ng/ml. After giving birth the progesterone level is back to its normal conditions. This is in agreement with Mukasa and Azage (1989) who found that progesterone level in Zebu cow was 1.0 ng/ml one week after calving. From this phenomenon, it showed that following parturition the level of the progesterone would be back to its normal conditions and ready for the next estrus cycle. The low progesterone occurred due to negative feedback action on the hypothalamo‐hypophysis axis, allowing for recovery of gonadotropin function to block progesterone being produced (Belli and Jelantik, 2011). Progesterone concentration is high in pregnant animal and in Bali cow and can reach up to 17 ng/ml when the cow is in the 7 month of pregnancy.

Cow bodyweight changed from early pregnancy (3rd month) to late pregnancy (9th month), and following parturition it showed similar pattern in all animals (Figure 2). The cow bodyweight increased during pregnancy in line with foetus development in the uterus and decreased subsequently following parturition. However, bodyweight tended to remain unchanged from 7 to 9 months of pregnancy due to change in diet composition; this was below the expectation, as this slightly affects body condition for most of the pregnant cows in this study. 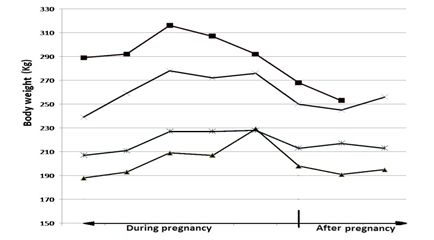 Figure 2: Bodyweight of Bali cow from early pregnancy, during pregnancy and following parturition.

Progesterone concentration in blood serum of Bali cows increased pronouncedly following conception and remains high during pregnancy, but slightly decreased two months prior to parturition then plunged to the lowest point following parturition to the non-pregnant level. The marked differences in progesterone concentration between pregnant and non-pregnant allow an early detection of pregnant status in Bali cow, and the level of progesterone during pregnancy may be used to estimate month of pregnancy.

We are grateful to acknowledge Prof. Dr. Ismeth Inounu and Prof. Dr. Argono R. Setioko for proof-reading the manuscript and the contribution of the technical assistances with their help during the work.

15. Jimenez, F., C.S. Galina, B. Ramirez, and R. Navarro-Fierro. (1985). Comparative study of the concentrations of peripheral progesterone before and after PG2alpha injection between Bos Taurus (Brown Swiss) and Bos indicus (Indo Brazil) in the tropics. Anim. Repro. Sci. 9:333-339.

16. Kayacik, V., Salmanoglu, R., Polat, B., & Ozluer, A. (2006). Evaluation of the corpus luteum size throughout the cycle by ultrasonography and progesterone assay in cows. Turkish Journal of Veterinary and Animal Sciences, 29(6), 1311. FIND ONLINE


We are looking for partners to help us develop this open access project further. Write to research@open-science-repository.com.