The magnitude and expansion of poverty in Nigeria continue to worsen since the late 1990s despite its plentiful resources. In the year 2000, the incidence of poverty in Nigeria stands at 69.2% of the population (Central Bank of Nigeria, CBN, 2001). Globally in 2005 it was reported that 1 out of 5 in the world’s population lived in extreme poverty (Department for International Development, DFID, 2005). In 2006, Nigeria was considered one of the poorest countries in the world, with over 70% of the population as poor and 35% living in absolute poverty (International Fund for Agricultural Development, IFAD, 2006). Widespread poverty in Nigeria is especially severe among farmers who dwell in the rural areas (IFAD, 2006), where agriculture engages over 60% of the labour force, responsible for producing 90% of the total food consumed in the nation.

Cooperative as defined by International Cooperative Alliance (ICA, 1994) is an autonomous association of persons united voluntarily to meet their common economic, social and cultural needs and aspirations through a jointly-owned and democratically–controlled enterprise. Agricultural cooperatives are important in the socioeconomic development of the rural economy. Basically, poverty entails low income, low or no access to production inputs, low productivity, illiteracy and lack of access to information and basic necessities of life. It describes a condition of low income that leads to low saving, resulting in low investment and, as a consequence of that, productivity remains low (Adegeye & Dittoh, 1985). Farmers are said to be trapped in this vicious poverty cycle due to their low output, low farm production; their income remains low and they are unable to make the necessary investments in farm expansion. The consequence of this is that they are unable to improve their living standard. To break out of poverty, farmers need strong institutions like cooperatives.

Purpose and objectives of the study

The main objective of the study was to evaluate the effect of membership of agricultural cooperatives on farmers’ income and their poverty status in Delta South senatorial district, Nigeria. The following specific objectives were addressed:

1. To examine respondents’ membership in agricultural cooperatives and the types of existing cooperatives in the study area.

2. To determine the influence of cooperative membership on respondents’ income.

3. To determine the relationship between agricultural cooperatives membership and poverty status of respondents.

Interview schedule survey design was used to collect data from agricultural cooperative members and non-members. The study was conducted in Delta South Senatorial District. It is one of the 3 districts in Delta State, made up of eight Local Government Areas --Bomadi, Burutu, Isoko North, Isoko South, Patani, Warri North, Warri South and Warri South-West. The target population of the study comprised farmers who are either members or non-members of agricultural cooperatives in the study area. A total of 244 respondents constituted the sample size of the study and was split as follows: a total 122 members of various types of agricultural cooperatives made up of multipurpose cooperative (72); credit and thrift cooperative (34) and fishery cooperative (16) were randomly selected from a list of cooperators provided by a cooperative Desk Officer in State Ministry of Commerce, Trade and Industries; a total of 122 non-members of cooperative societies were chosen from farm households in the study area. Data on respondents’ income was derived from farm budgeting. Farm budgeting involves considering the resources and a calculation of expected receipts, expenditures and net farm income (Olukosi & Erhabor, 1988). Specification of net farm income is:

Poverty status of respondents was determined using the income approach and was computed using Foster, Greer and Thorbecke model.

The model specification is as follows:

Where: Pα= Poverty index; N = the size of the population under study (244); Z = poverty line; Z - Y = the gap between the poverty line and the income for each poor individual; q = number of individual below the poverty line; Yi = capita income of the ith poor household; α= non-negative poverty aversion parameter that takes the value 0, 1, 2. 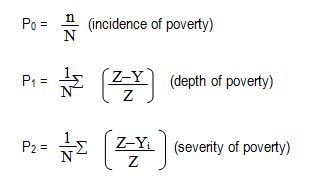 Poverty line was placed at two-third mean income of respondents as adopted by FOS (1999) and the World Bank/FOS/NPC (1998). Based on this, the respondents were classified into three groups:

Multipurpose as a type of agricultural cooperative combines various activities, like credits, marketing, agricultural production, consumer activities (Adetunji, Oladejo, Okunola, & Adepoju, 2008). The multipurpose cooperative is therefore more suited to meet the diverse agricultural needs and interest of farmers than other cooperative types (Table 1). Farmers membership in the credit and thrift society may be attributed to the fact that it provides necessary fund for their farm needs, without stringent collaterals (International Labour Organization, ILO, 2002).The fishery and fishing cooperatives were common in the riverine areas of the study areas --Patani, Warri South west, Warri North, Burutu, Warri south and Bomadi. This is expected as the major farming occupations of the people in these areas were fish production and processing.

Table 1. Frequency distribution of respondents by membership, types of cooperatives and non-cooperators.

Comparing the modal annual net farm income of cooperators and non-cooperators, farmers in the study area are generally low income earners; but comparison on the basis of the grand mean revealed that farmers who are members of various types of cooperative earned higher farm income annually than farmers who are not members of any type of cooperative. Among farmers’ cooperators, multipurpose cooperative farmers earned the highest mean net farm income annually. The ILO study on poverty alleviation strategies through sustainable rural infrastructure development in 2002 found that agricultural cooperatives were some of the means of improving farmers’ income and reduction of poverty (ILO, 2002) and that the greatest direct economic impact of cooperatives at the micro level was reflected in the additional income they created for their members (Tables 2 and 3).

Also, incidence of poverty (P₀ = 0.930) among the cooperators means that 93% of them in the study area are subsisting on income less than the poverty line, the value of P₁ = 0.021 means that the poor farmers’ cooperators are short of subsisting income by 2.1%, and P₂ = 0.011 implies that the problem of income poverty is 1.1% severe in the study area whereas the incidence of poverty (P₀ = 1.00) among farmers’ non-cooperators was 100%, implying that all of them are subsisting on income below the poverty line, all of them are short of subsisting income by 3% (P₁= 0.030) and the problem of poverty of income is severe among them by 2.3% (P₂ = 0.023).

Multipurpose cooperatives attracted the highest number of members than credit and thrift and fishery cooperatives. However, the type of occupation engaged in by the farmers is also an important factor in deciding the type of cooperative to be affiliated. Farmers’ cooperators and non-cooperators were generally low income earners. The mean annual net income, incidence, depth and severity of poverty of farmers’ cooperators and non-cooperators together provide sufficient evidence that membership in agricultural cooperatives could serve as a means for improving farmers’ income and well-being. Based on the study’s findings and results, the following recommendations are made:

2. Farmers’ low income predisposes them to poverty, poor standard of living and vulnerability to shocks. To enhance the farmers’ income level, agricultural cooperatives in the study area have several responsibilities to play in the education of farmers. This is because the majority of them are illiterates who need new knowledge, skill and attitudinal change for effective and efficient farm management operations.